Theatrix Youtheatre Society is celebrating 30 years of promoting and encouraging the performing arts for children in the Lower Fraser Valley.

Theatrix Youtheatre founding Artistic Director, Deborah Solberg is handing the reins to Lauren Hillman with the succession planning assistance from the City of Port Coquitlam and board of directors. “It’s time to hang up my directing and producing hat,” said Deborah Solberg. ‘Lauren is brilliant at creating original theatre and the perfect person to build the next 30 years.’

Theatrix marks the anniversary by launching programs in partnership with the Langley Arts Council under the direction of Lauren Trotzuk. Theatrix’s first program in the Langley and Aldergrove area starts in April. During the Saturday morning program, students ages 6-11 will work with the director to create a script, story and characters from scratch.

“What sets us apart from other theatre groups is our dedication to producing original work and ensuring that the children enrolled in our programs have a voice in that creation,” Theatrix Youtheatre’s Artistic Director Lauren Hillman says. “We value the process of creation as much as the final product. The students grow the most from the creative process and we think that’s just as important as what they eventually present.”

Rehearsals includes discussions about mental health and happiness and activities for mental wellness such as meditation, visualization, yoga and more.

“We really wanted to focus on happiness and mental health because everyone is struggling with mental health right now, kids especially, and they don’t always get a chance to talk about it,” Hillman says. “Everyone is dealing with extra problems, extra stress, and this is a place for kids to feel safe expressing their feelings.”

The original production is one of three performances at a mini theatre festival – KIDSPEAK – at the Evergreen Cultural Centre on Saturday, June 19th as the first in a series of 30th anniversary events, sponsored by the City of Coquitlam.

The second anniversary event is The Memory Masquerade at Riverside Community Church to be held August 7, with an interactive walking tour dedicated to Theatrix’s past, present and future. “We don’t teach actors, we teach children to be better humans,” Hillman says. “Our students learn empathy, communication, and how to read body language. The things actors do on a regular basis also help them in life.”

The third event is planned at the Inlet Theatre in Port Moody to officially wrap up the anniversary and acknowledge the participants of the past 30 years with a concert and awards program. 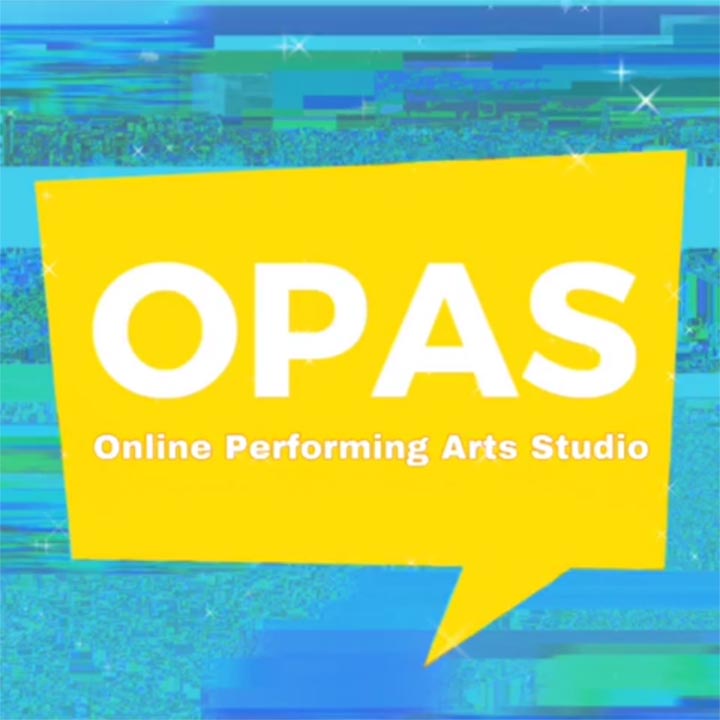 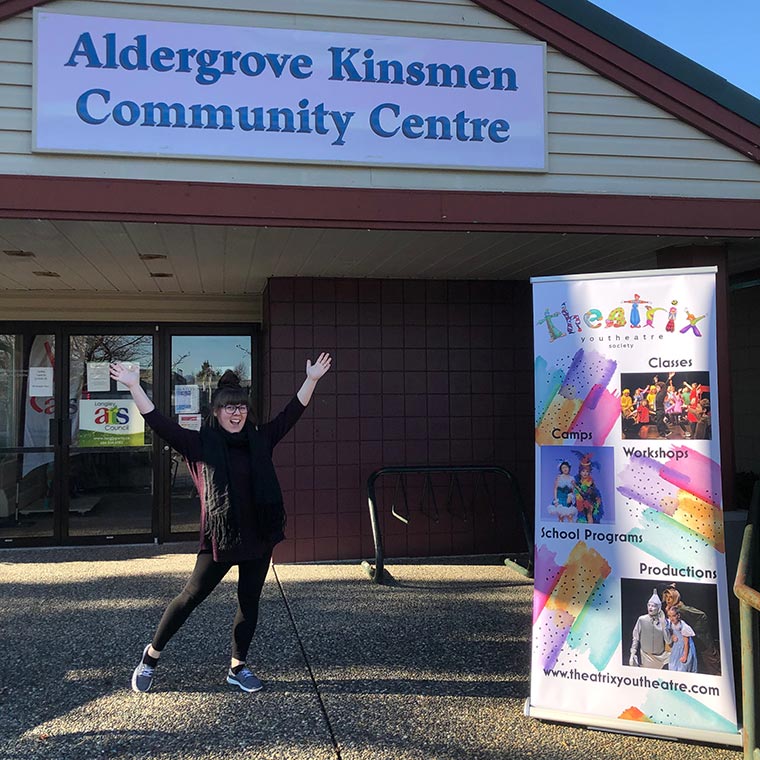 Theatrix Youtheatre Society is excited to announce as part of its 30th Anniversary year that we’ll be launching programs at a new Langley location. In partnership with the Langley Arts Council, our first program in the Langley/Aldergrove area will start in April and be an original production, to be performed at a mini theatre festival in June. 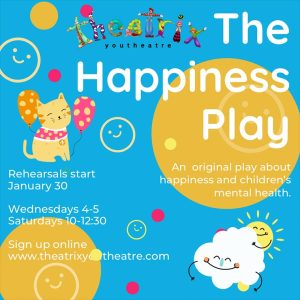 A shop has appeared out of nowhere. It wasn’t there yesterday. Run by a mad scientist and his loopy shop assistants, most would be afraid to enter, if it wasn’t for what the shop claims to sell… Happiness. When a group of children, each dealing with their own personal problems, discover The One-Stop Happiness Shop they’re certain this is the answer they’ve been looking for. A magic pill to get rid of all their problems. But they’re about to learn there’s no shortcut to happiness.

This will be our second original play of the season to deal with important social topics. In this case, the play will get kids thinking and talking about their mental health, what it means to be happy, and how exactly it can be achieved. Rehearsals will include mental health activities often used in acting like meditation, visualization, yoga, and more. This show will also involve clown elements and actors will get to explore their inner clowns as they help create this play from scratch. 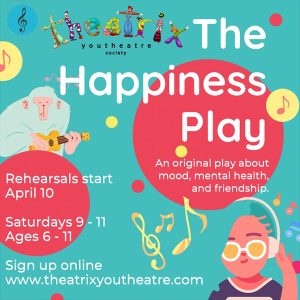 Sam is having a bad day. An awful day. Sam is having an awful, sad, completely horrible, and just plain crappy day. Normally a cheerful kid, today Sam’s anything but happy and it looks like nothing will be able to change that. But not if Sam’s friends have anything to say about it! They know her better than she knows herself, and they know how to make her happy. At least, they think they do. And they’ll do whatever it takes to bring a smile to Sam’s face; sing a song, do a silly dance, tell a funny joke. Because if they can make her smile then she’ll be happy… won’t she? 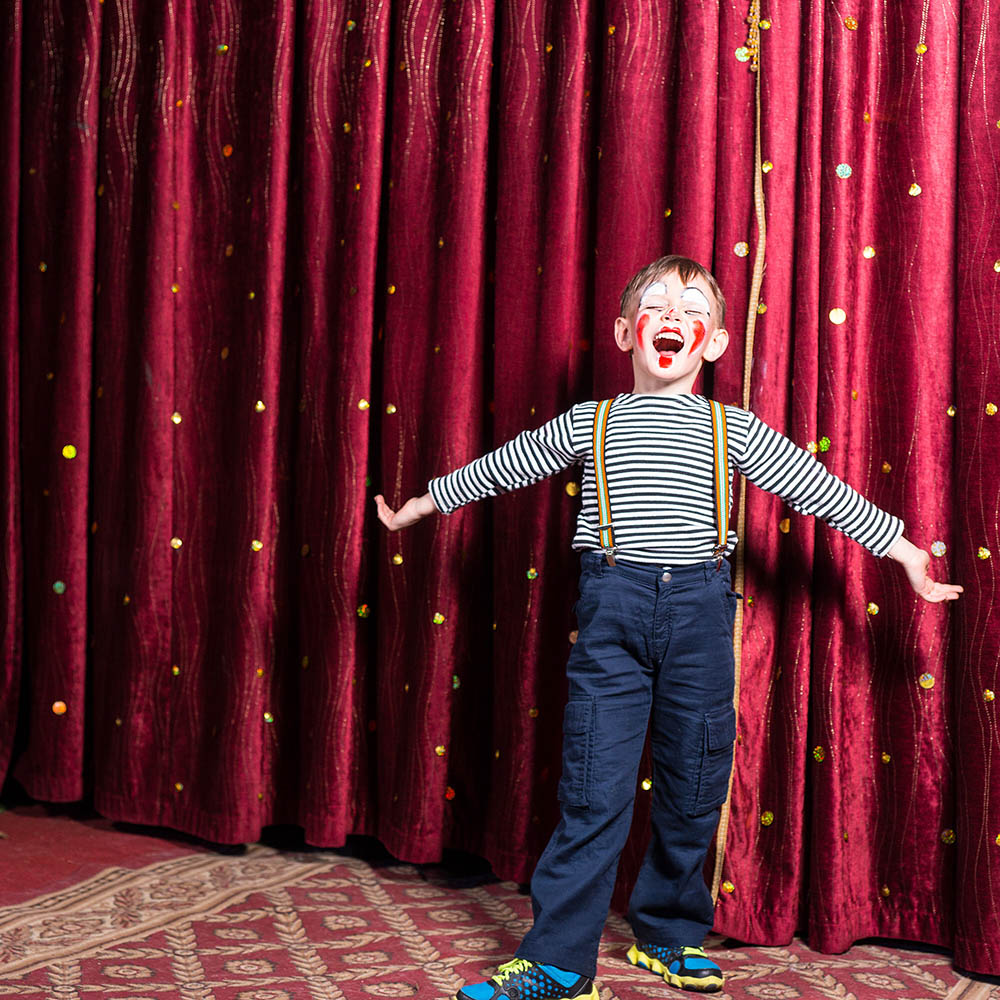 This is a weekday drama class for kids who are homeschooling. Weekly lessons include elements of singing, dancing, and acting and will give every student the chance to shine. 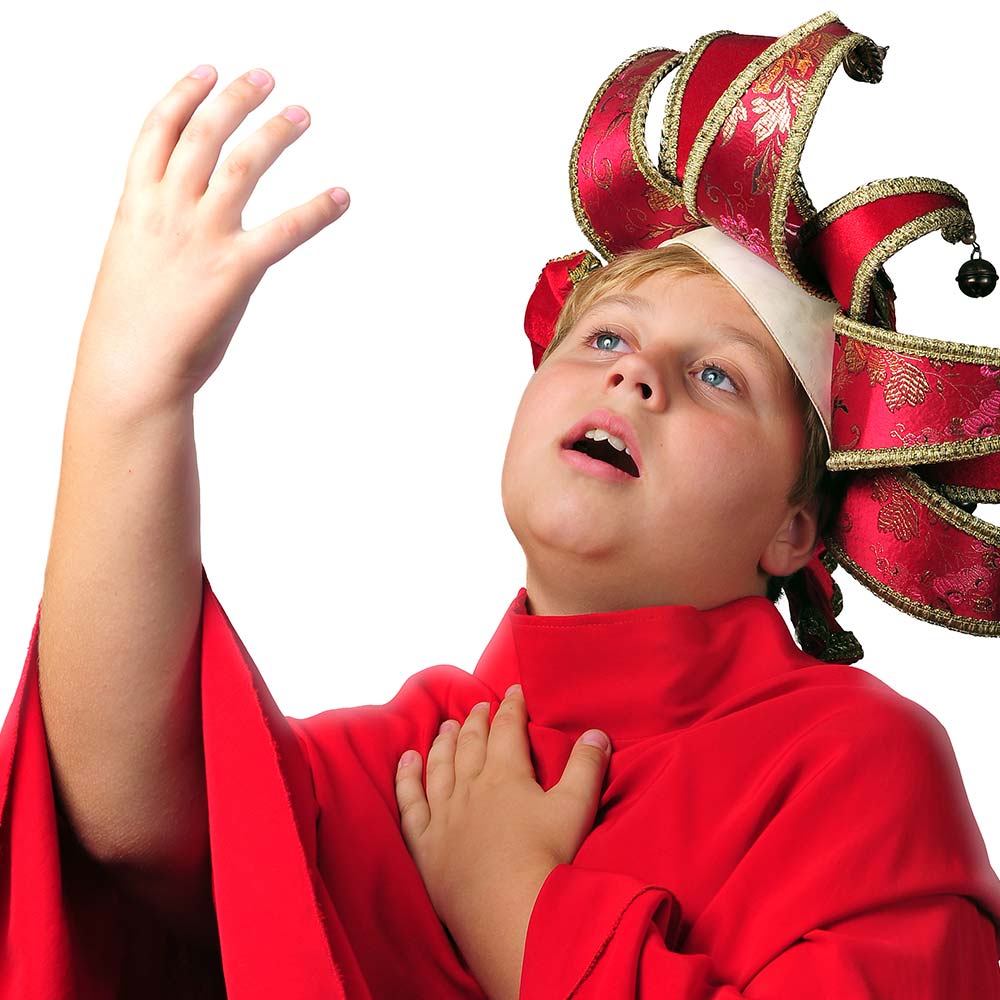 Everyone is a star in this class as we use acting games and short scripts to help us learn about a different acting tool each week. Perfect for kids who enjoy our Lunchbox and Spotlight Theatre programs!

Note: Some parts of this class will be recorded as a virtual showcase video for students to present their work.

Everyone is a star in this class as we use acting games and short scripts to help us learn about a different acting tool each week. Perfect for kids who enjoy our Lunchbox and Spotlight Theatre programs!

Note: The final class will include the opportunity to perform and showcase your work. If a live performance is not possible due to health guidelines in place at the time, it will be recorded for a virtual showcase. 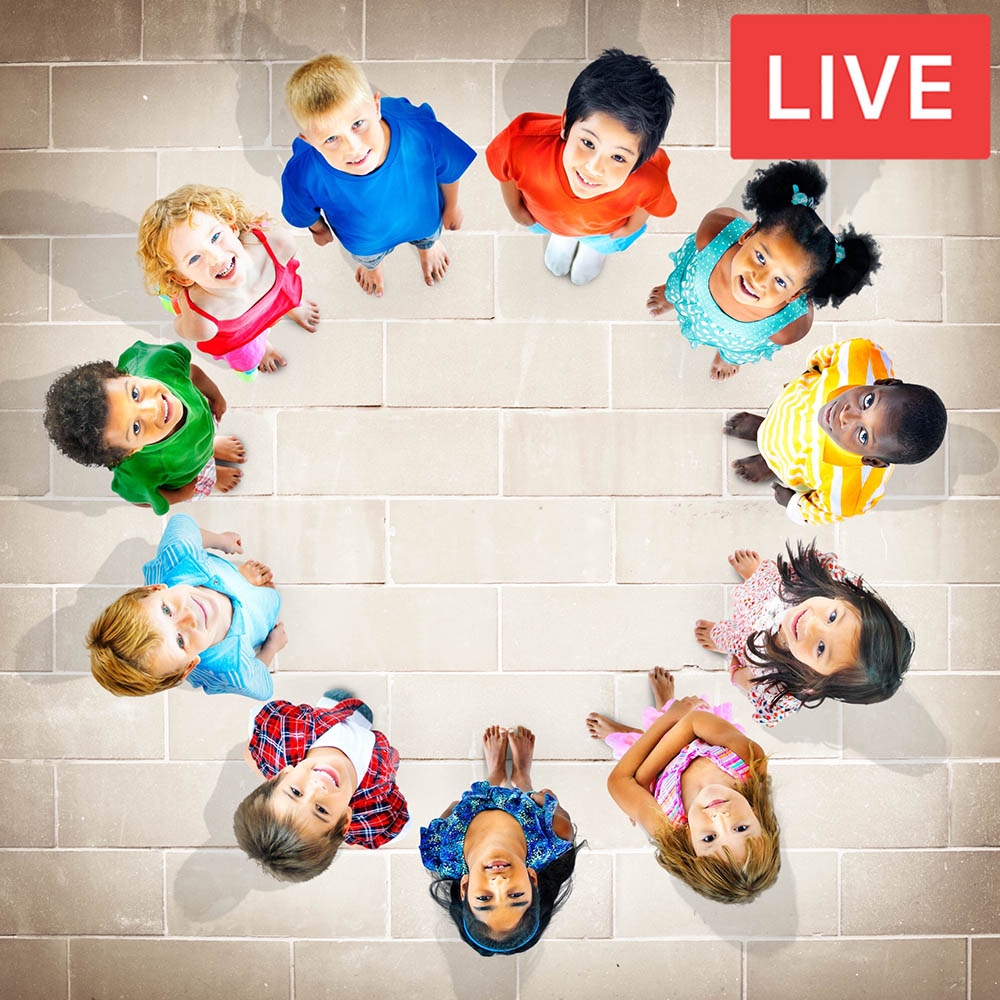 Broadway in a Bubble (LIVE at your place)

This is a drama class where the entire class and content is designed specifically for you. If you’ve got a group of friends or family who’ve been in your “bubble” all summer long, and a space large enough for that group to meet, then we will come to you and teach a drama class for your bubble. The rate listed is for a one hour class for the entire group. Reduced rates are available for groups who’d like the class to recur more than once. Think of it like a drama workshop that comes to you! 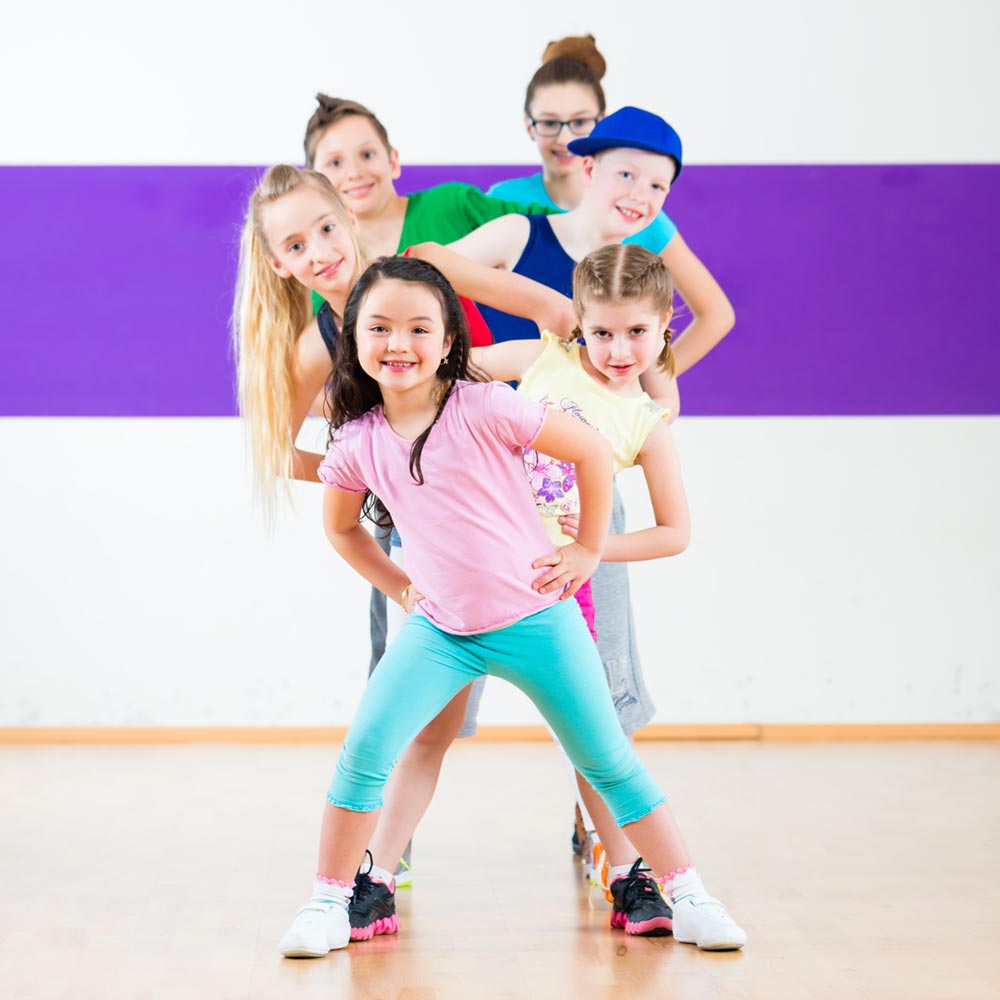 Star in a different Broadway musical each week from your own home. Follow along with Miss Ashley in weekly dance warm-ups and stretches, then learn choreography to a new song each week. Modifications can be given to make moves easier or more challenging, so no previous dance experience is required.

Note: Some parts of this class will be recorded as a virtual showcase video for students to present their work. 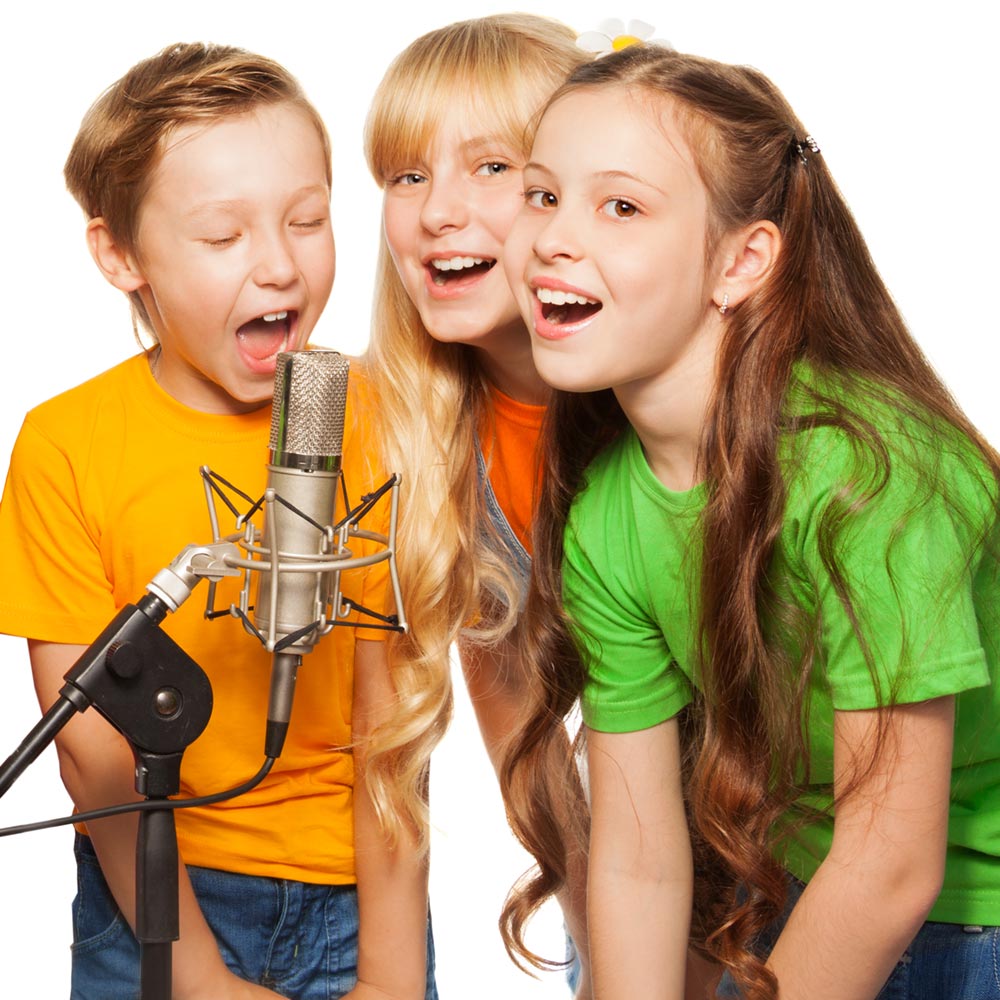 Do Re Mi Musical Theatre (VIRTUAL) – with Lauren Trotzuk

Love to sing, dance and act? This musical theatre voice class will get kids learning a new song each week, while also teaching them proper vocal warm ups, techniques, and performance tips.

Note: Some parts of class will be recorded as a virtual showcase video for students to present their work. 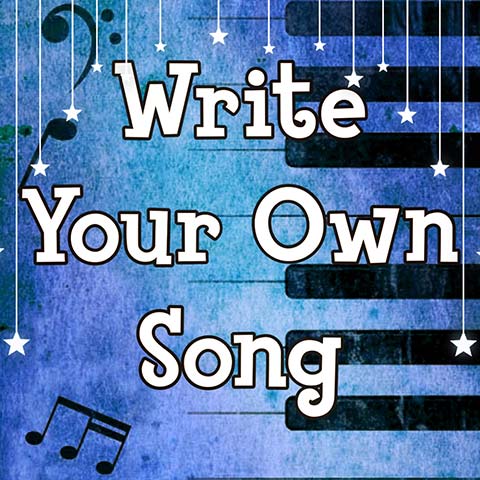 Write Your Own Song – with Mr. I

Do you have lyrics or an original poem you’d like to turn into a finished song? Do you have a catchy phrase, a concept, or even just the idea for a song in your head? Then let Mr I and Janina help you turn it into a reality! After a virtual consultation they will create an original backing track for your original song!

OPAS also includes free resources that both educate and entertain. You can find scenes from our original plays for you to use at home, as well as full scripts, and games. And in our video series, Behind the Curtain, kids can watch inspiring interviews with professional performing artists as they tell us how they got to where they are today – and how you can do it too!

We’ll be creating new content for you on a regular basis – new classes, video series, contests, workshops, etc. So check back regularly to see what’s new!

Lastly, we just want to say that we understand times are hard for many people right now, so it’s especially important we remain accessible and affordable. Subsidies can be requested by emailing register@theatrixyoutheatre.com.

We’re very passionate about OPAS and we sincerely hope that it helps our community stay engaged with the arts during this time. So explore the online studio, check out all our FREE resources, and be sure to check back often as we continue to create new online performing arts content!